Liverpool legend-turned-pundit Jamie Carragher has claimed that Manchester United are unlikely to end up with the Premier League title unless they improve their record against the top-six opposition. The Red Devils stretched their unbeaten run to 11 across all competitions after they earned a 0-0 draw against Liverpool on Saturday. 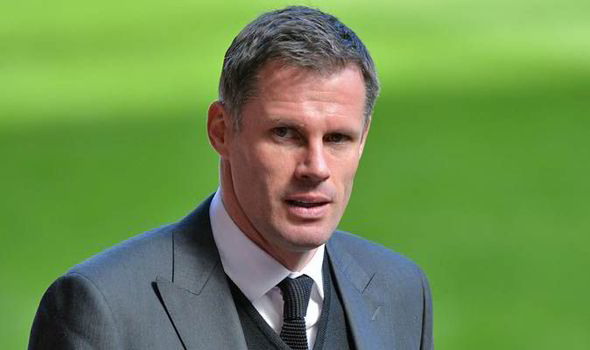 Despite bagging a point, United’s approach was criticised in the media as they stuck with a defensive plan from the start to the finish. As a result, Mourinho has failed to win any of his previous 10 outings on the road versus top-six opposition.

Speaking on Sky Sports’ Monday Night Football, Carragher insisted that United will lose out on the English crown, should they fail to secure victories in big away games, he said: “I think the criticism will be saved to the end of the season if results in big away games don’t improve and it costs them the title. Jose Mourinho has always been lauded as the man for the big occasion, but his way of late is not working.”

“With the top six now, there are 30 points up for grabs. If that doesn’t improve, they won’t win the league. Manchester City have got six points from matches against Chelsea and Liverpool. Somewhere along the line Mourinho has got to pick up points.” United are currently second favourites for the title at williamhill.com, with City the clear favourites.

The Red Devils are currently trailing leaders Manchester City by two points after eight games into the season, but it could be said that the Citizens have received the tougher run, having faced both Chelsea and Liverpool in the early part of the season.

Both Manchester clubs do not face each other until December and United could potentially find themselves further adrift of Pep Guardiola’s side – with vital games against Tottenham Hotspur, Chelsea and Arsenal to come. Manchester City’s attacking brand of football has received plenty of admirers this season, but Mourinho’s tactical approach on the road could hinder their chances of ending their Premier League drought.

This allm sets it up nicely for the winter transfer window, with both United and City, as well as the other possible contenders like Chelsea and Tottenham, looking to strengthen to aid their challeneg for the title. Whilst United have bought well in defence, with Lindelof starting to impress and the back-four having conceded just 6 goals all season (the lowest of any side in the Premier League), they have been missing someone to craft chances against the likes of the Top 6 sides to steal the points. They are rumured to be back in for Inter Milan’s Ivan Perisic, whose craft and guile might help, though the return of Zlatan might also help them to step up that extra gear to take on all comers.